On June 30, LWCC formally dedicated the Governor M.J. “Mike” Foster, Jr. Learning Center. We were thrilled to have guests attend the unveiling both in-person and virtually, including members of the Foster family and their close friends, LWCC employees and board members, agent partners, and policyholders. The event celebrated the life and achievements of Governor Foster, and officially opened the doors to the Foster Learning Center at LWCC for the first time.

“We would not be who we are or where we are were it not for Governor Foster. His leadership, his loyalty, his patience, his drive made us who we are and helped us become better, and helped our state become better, too,” said Kristin Wall, President and Chief Executive Officer of LWCC. “We’re proud to be able to honor him through the Governor M.J. “Mike” Foster, Jr. Learning Center at LWCC.”

The opening event for the Foster Learning Center made us especially proud to be LWCC and demonstrated what it truly means for us to be Louisiana Loyal: our movement to celebrate and elevate Louisiana. If you missed the event, don’t worry. We’ve shared some of the highlights from the day for you as well as a recording of the event.

The dedication ceremony was led by LWCC’s President and Chief Executive Officer, Kristin W. Wall, with additional remarks from special guests such as Boysie Bollinger, Chairman and CEO of Bollinger Enterprises; Stephen Perry, President and CEO of New Orleans & Company; and a video message from President George W. Bush — all friends and former colleagues of Governor Foster.

Boysie Bollinger was personally recruited by Governor Foster to serve on the LWCC Board of Directors. A close friend of the Governor for decades, Bollinger accepted and during his 20-year tenure he provided support, guidance, and invaluable innovative thinking that directly impacted LWCC’s success.

“The success of this company and the fact that we’re dedicating this learning center to Mike Foster is so appropriate. It’s so beautiful. It’s so modern. I know the company will be a lot more efficient with the changes that have been made,” said Boysie Bollinger.

Another prolific guest, Stephen Perry, was immediately recommended by Mrs. Alice Foster because of his deep relationship with Governor Foster and his complete appreciation for the impact he had on the state. Between recollections and remarks, Perry acknowledged his love and admiration for the late Governor as a politician but most importantly as a friend.

“This company was his greatest pride and joy. This was certainly one of the fundamental underpinnings of a business being able to operate in the state of Louisiana,” said Stephen Perry.

Stories were told, (some) tears were shed, and, most of all, the legacy of Governor Foster was celebrated and cemented with the dedication of the Foster Learning Center. His past accomplishments now have a part to play in the achievements of the future. You could say that his vision for Louisiana now has a landmark to match it.

THE MAN BEHIND THE VISION

The ability of LWCC to open this new facility is a direct reflection of the success the company has had over the years, which would not have been possible without the vision of Governor Foster. When he decided to run for political office, his first goal (of many) was to improve the workers’ compensation market in Louisiana—a market that, at the time, stymied economic growth in the state.

Injured workers couldn’t access their benefits in a timely manner because of the market’s instability. That’s why he authored a constitutional amendment and legislation in 1991 to create LWCC as a private mutual insurance company; positioning it for sustainable future success. As a result, the workers’ comp market in Louisiana is now stable, and rates have decreased by over 60%.

“Mike was so creative with his thinking — always challenging. He came in and brought back a lot of the history that LWCC was. We often were reminded during our board meetings: why we are here, why we exist. It’s not to be the most profitable company in the world but to be a stabilizing factor for the insurance markets in this area,” said Boysie Bollinger.

In a show of appreciation for Governor Foster, LWCC CEO and President Kristin Wall presented a commemorative plaque to Murphy J. Foster III, the son of our late founder. The beautiful keepsake features a piece of Louisiana Cypress wood used in the construction of the space. The Foster Learning Center is a perfect tribute to Governor Foster’s legacy. Everything about the facility honors his values, his character, and ensures that his name will remain connected to LWCC.

A FRESH LOOK TO FIT THE NEW FACILITY

For a facility with as bold a future as The Foster Learning Center, it’s only fitting that it’s visual and verbal brand elements line up with it’s ambitions. Thoughtful consideration went into every detail of the branding to make it noticeable, intentional, and impactful.

A video was played at the event to showcase the space and share the vision.

The mark in the logo is a play on the safety stripes which are a significant part of LWCC’s history and purpose, but also create an illusion of upward movement or momentum, similar to the use of the Louisiana Loyal pelican in other applications. It also resembles a flag, tying in the Governor’s political achievements and commitment to our state. In everything, it’s so important that it all comes back to our promise.

“While the life and achievements of Governor Foster are honored in the facility, he would be proud to see that LWCC’s promise continues to move forward and that our commitment to Louisiana is stronger than ever,” said LWCC President and CEO, Kristin Wall.

EARNING OUR PLACE IN HISTORY

Boysie Bollinger said, “The fact that we have this learning center is what Mike was about. The change in the education system he brought on was tremendous for business. Likewise, LWCC earned its place in history by changing the world of insurance in Louisiana.”

The Foster Learning Center is located on the ground floor of LWCC’s newly renovated home office which is centrally located in Baton Rouge on S. Acadian Thruway, just off the I-10 interstate exit. 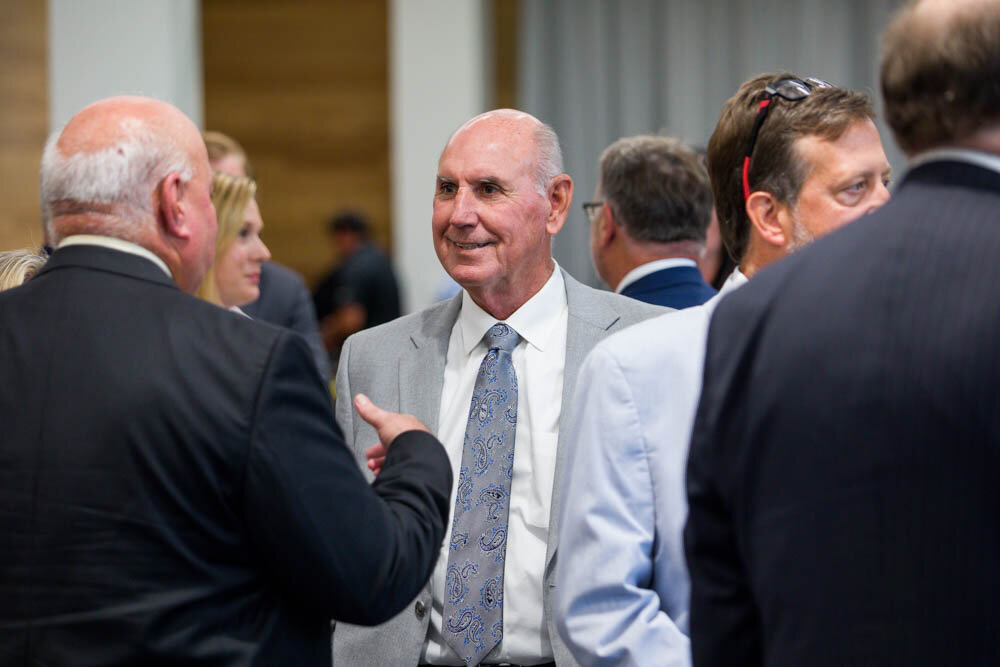 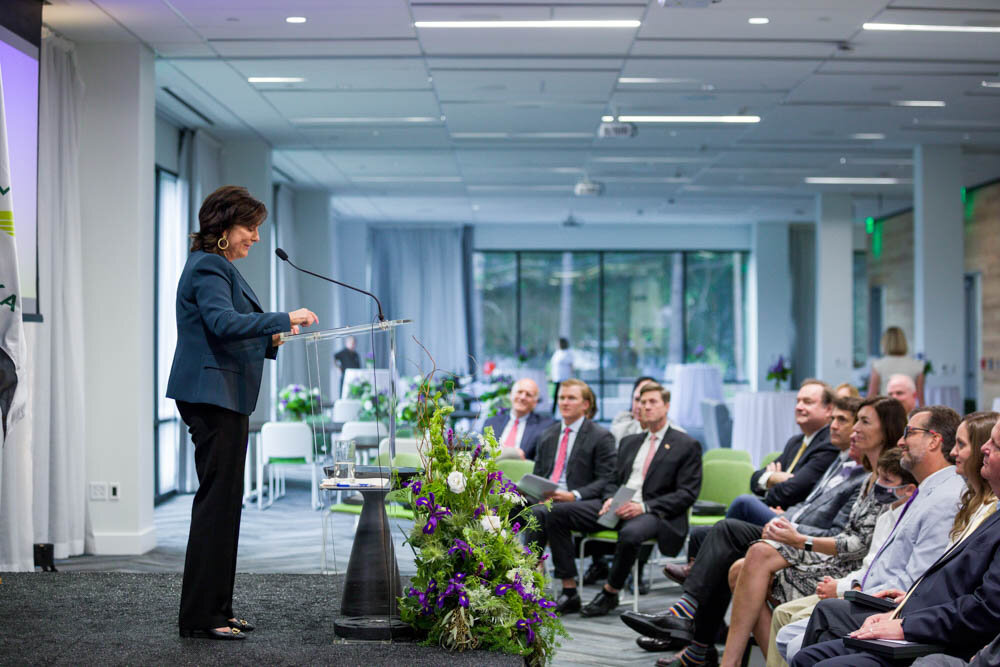 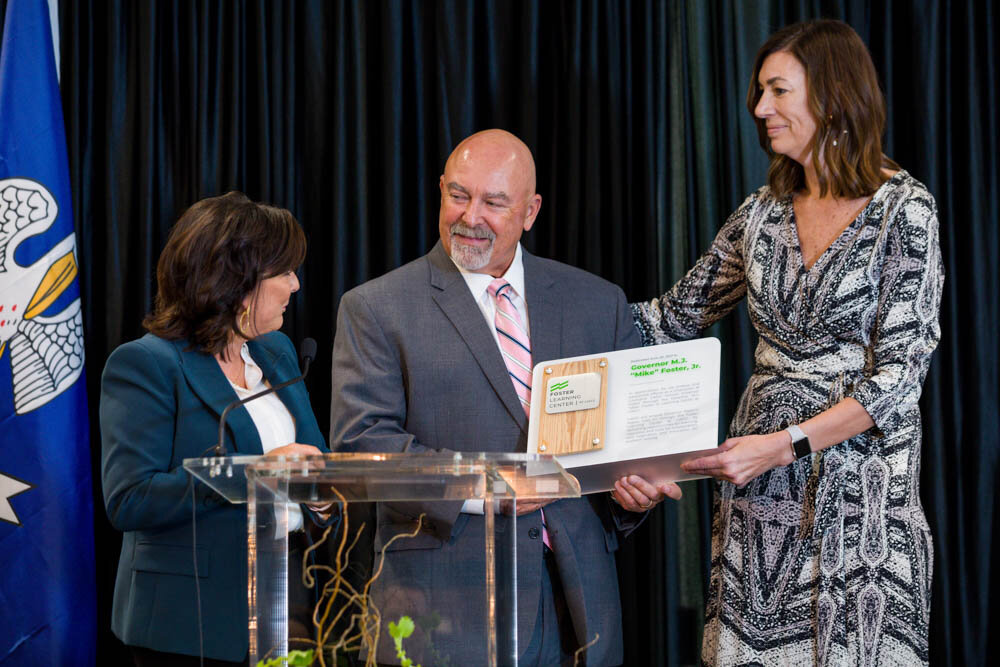 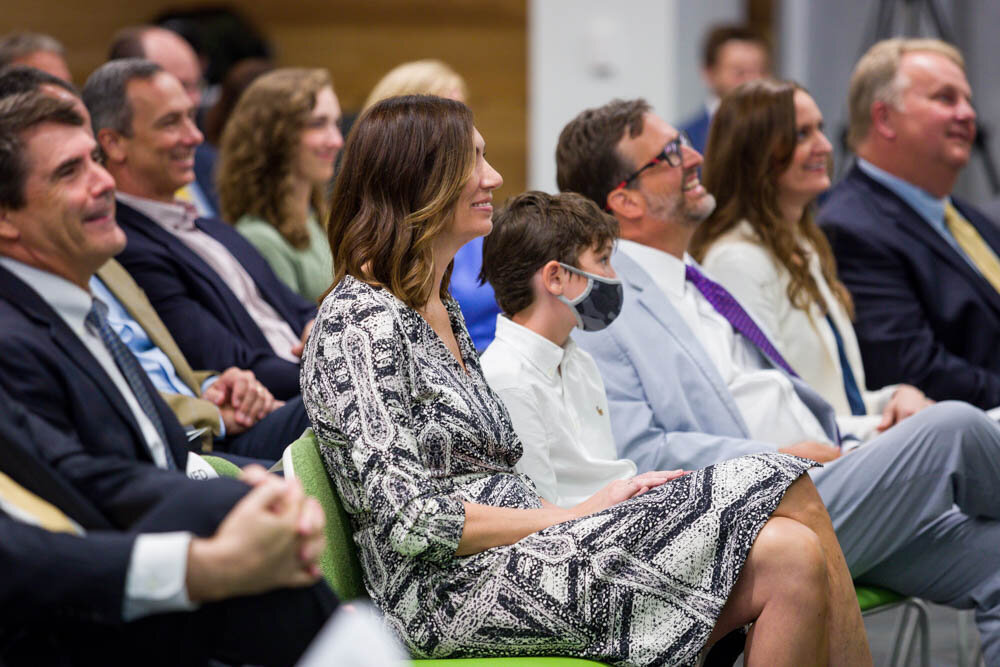 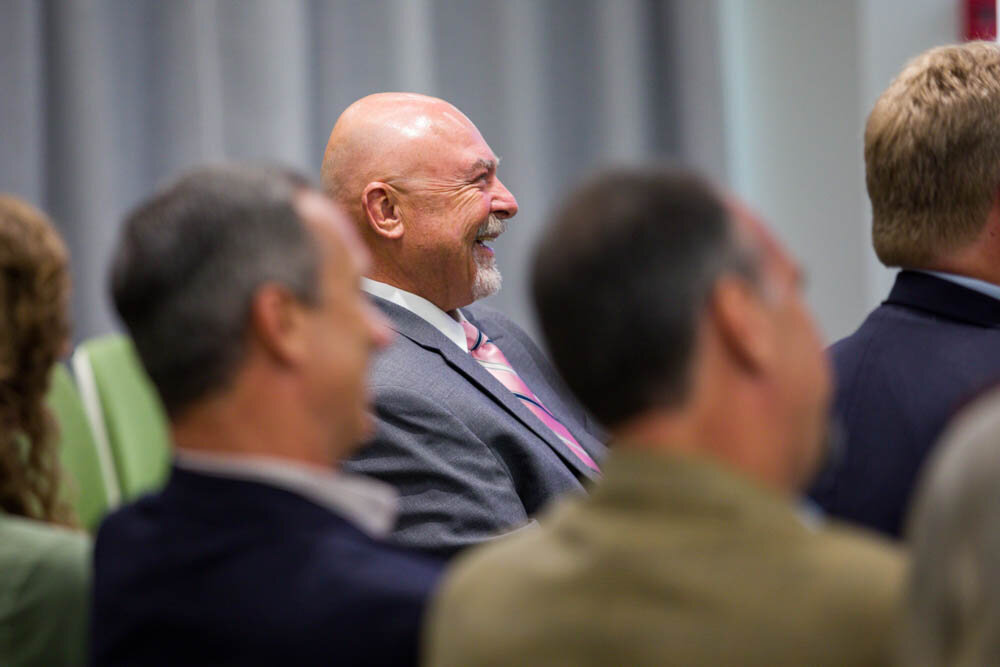 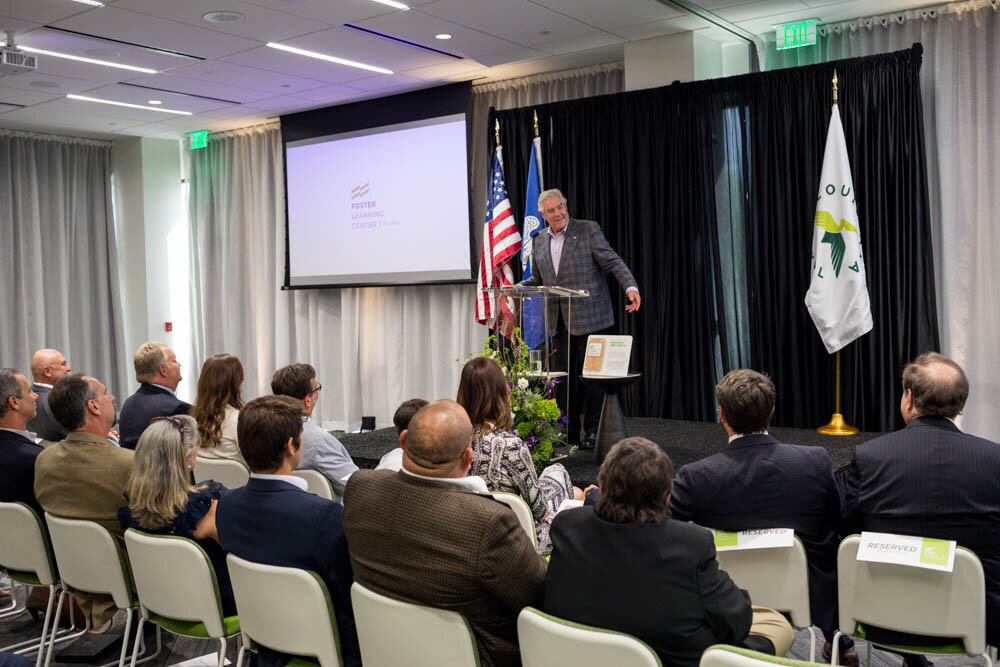 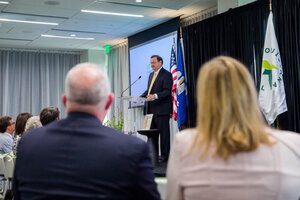 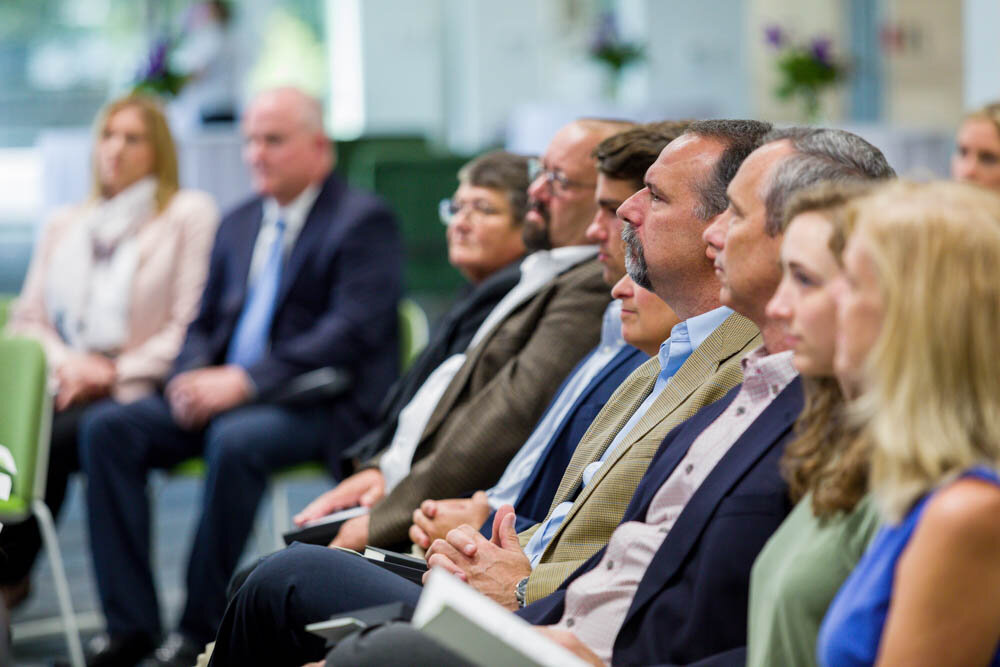 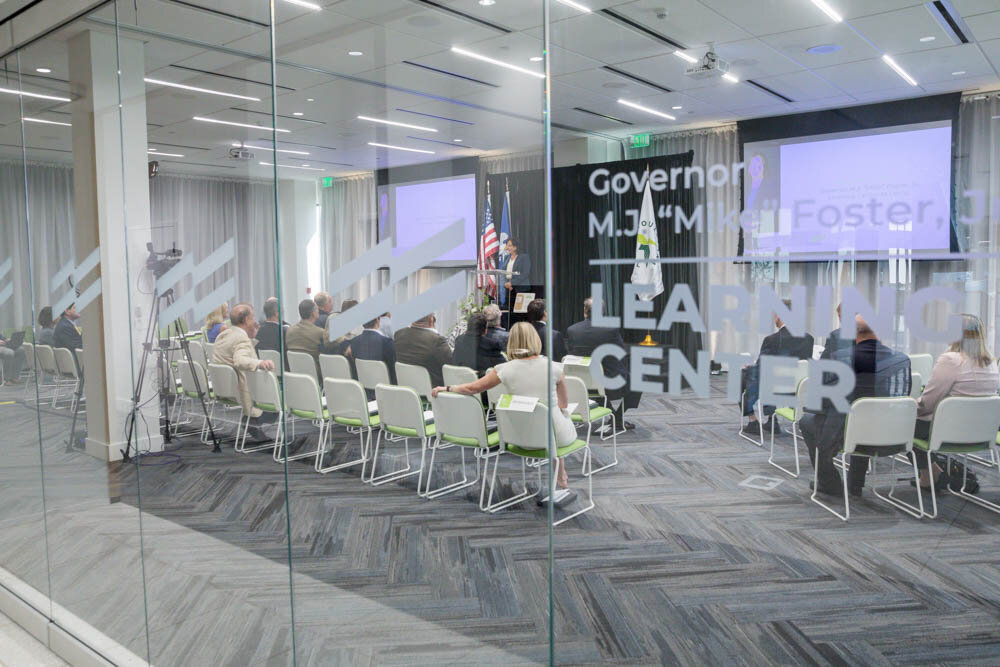 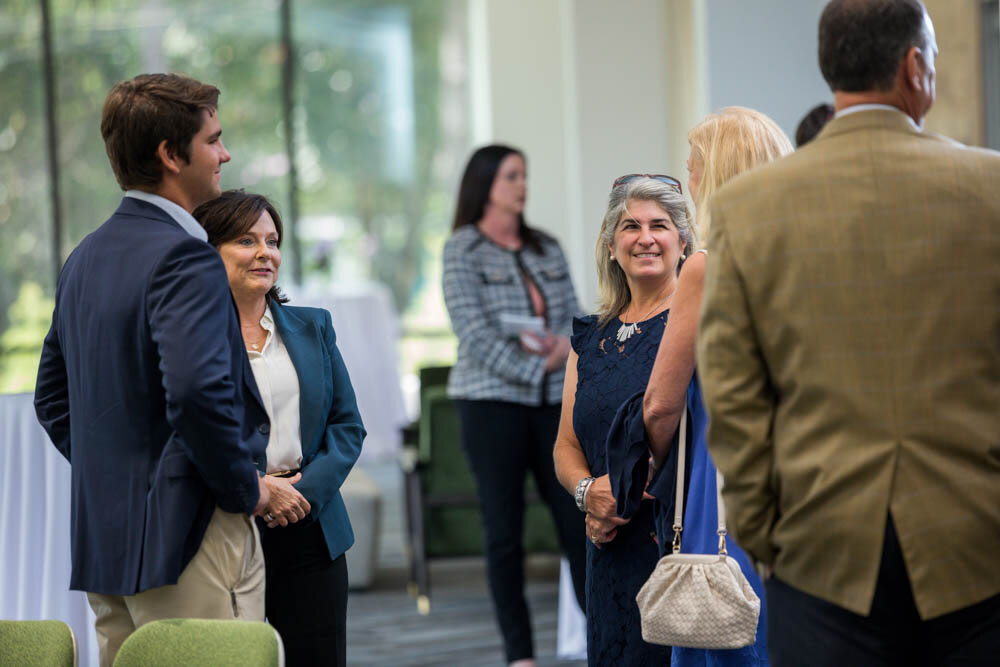 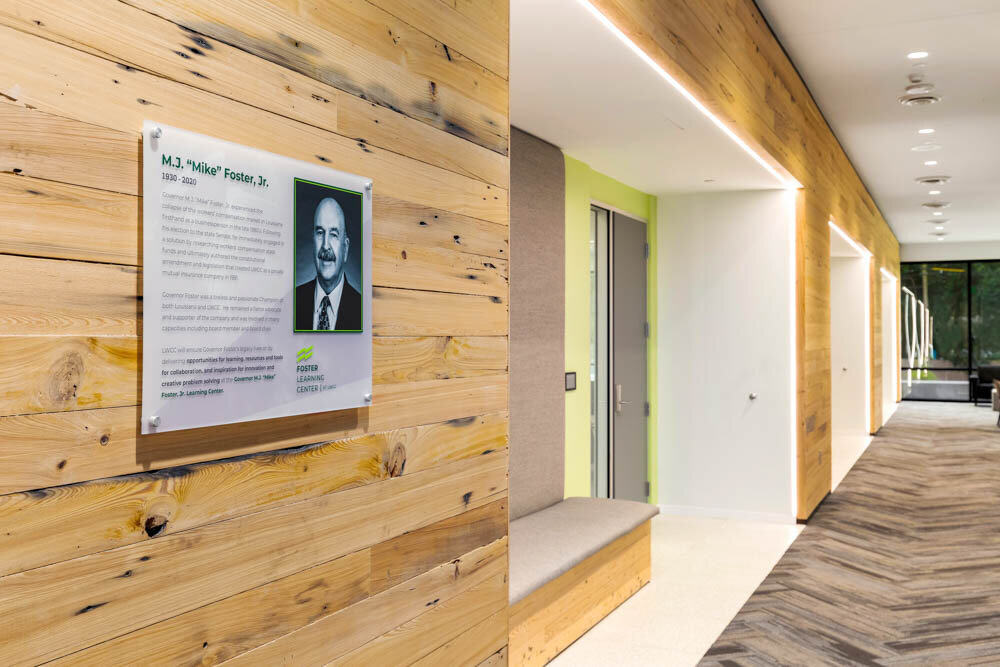 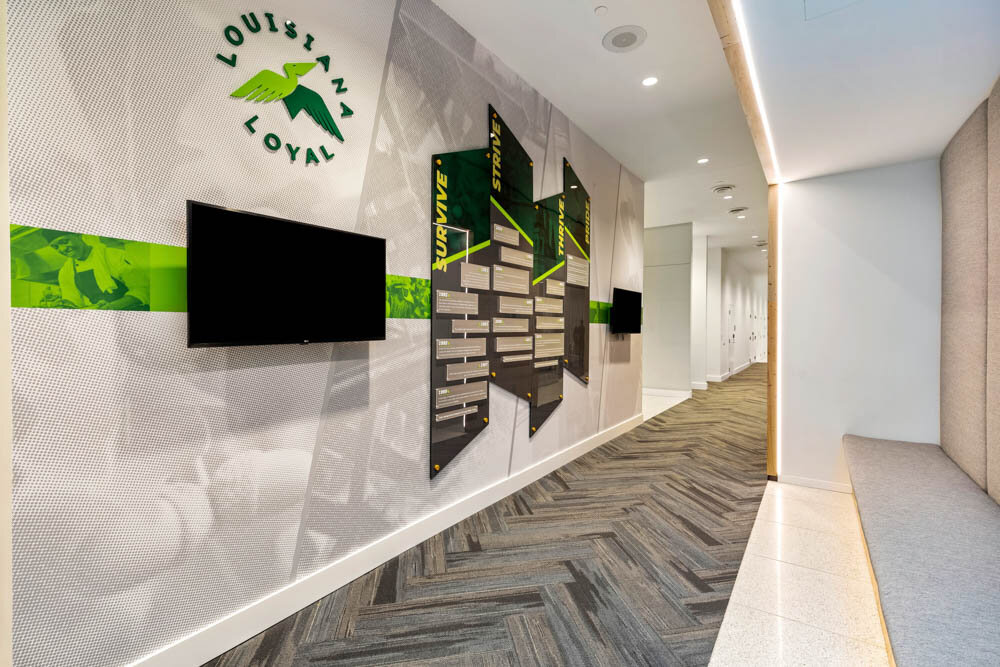 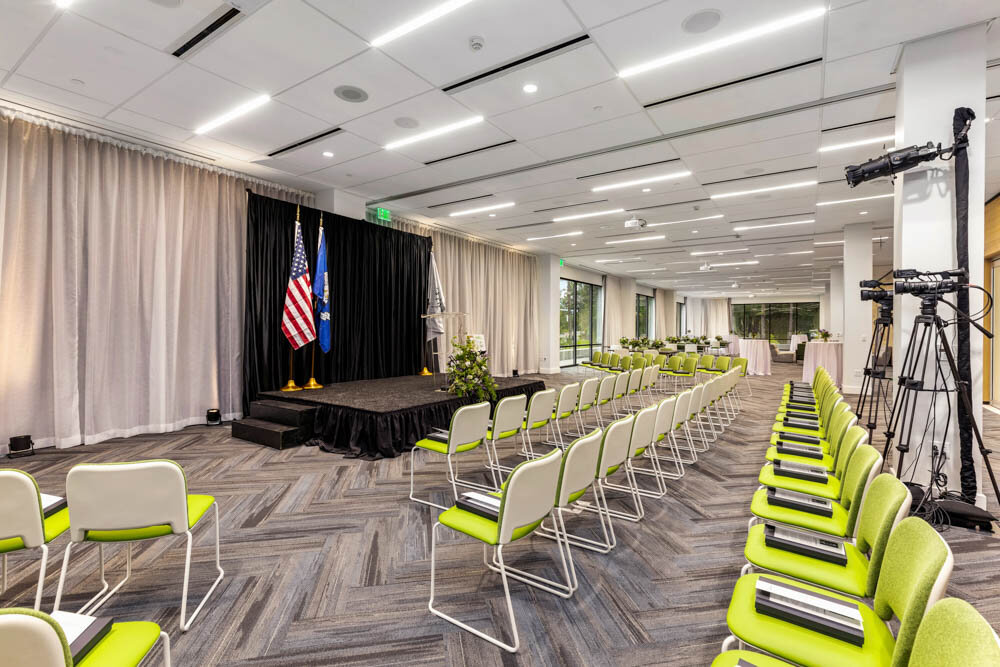 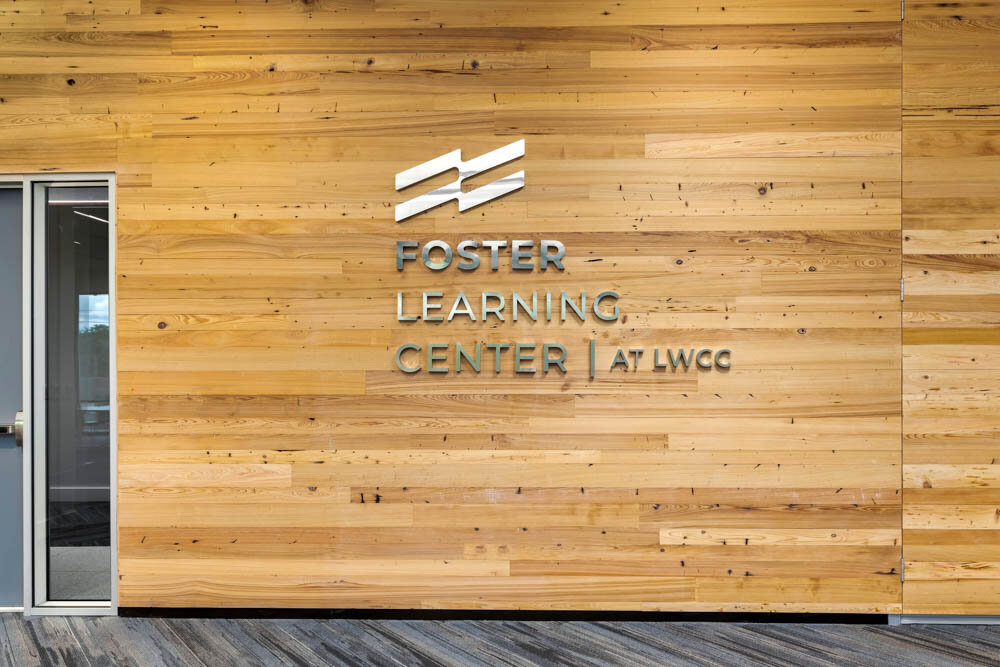 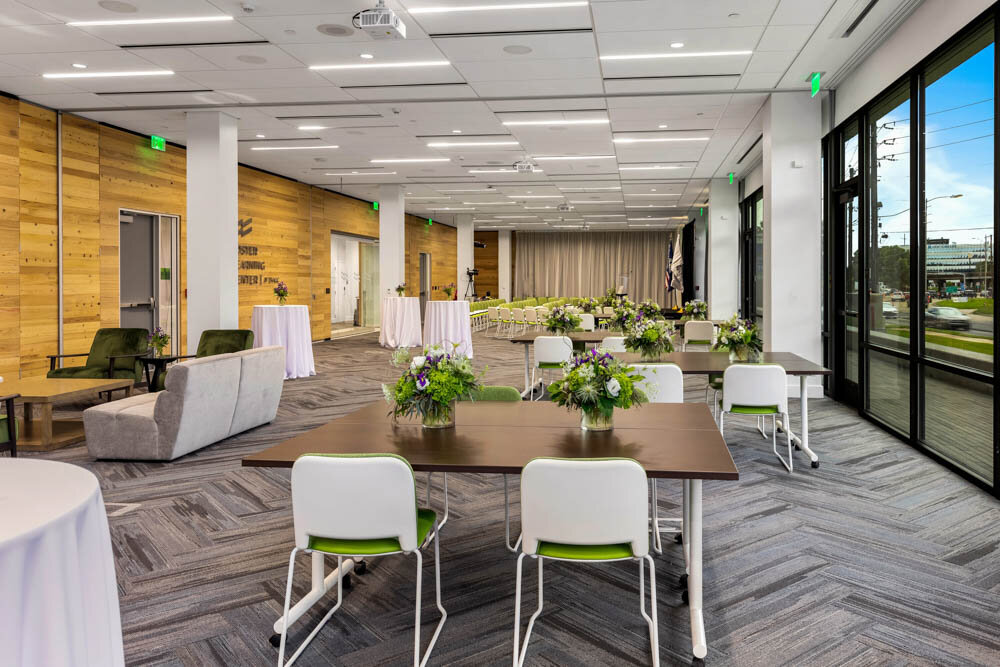 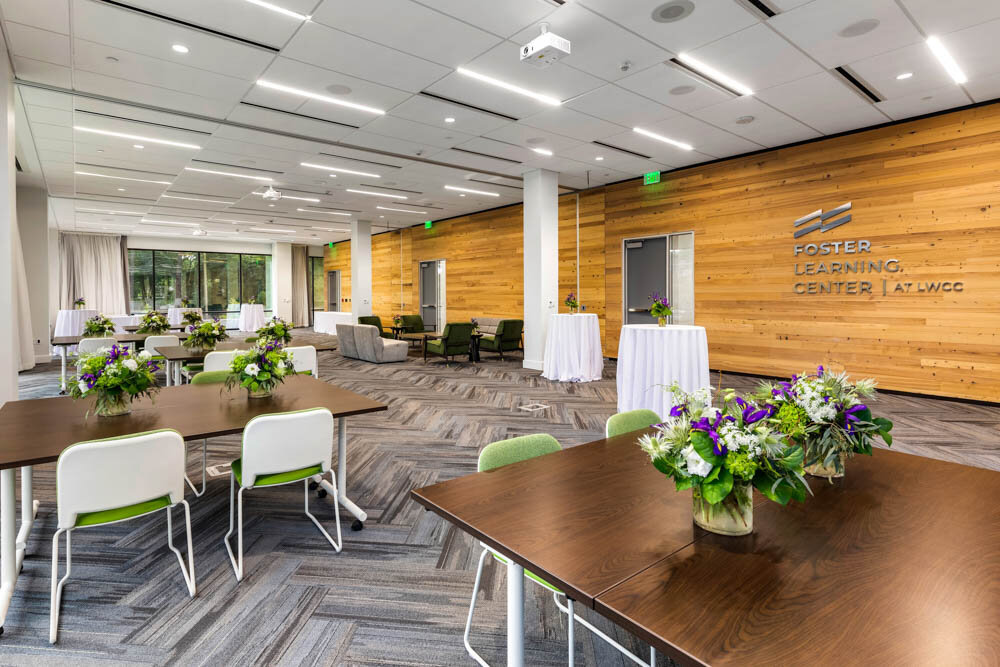 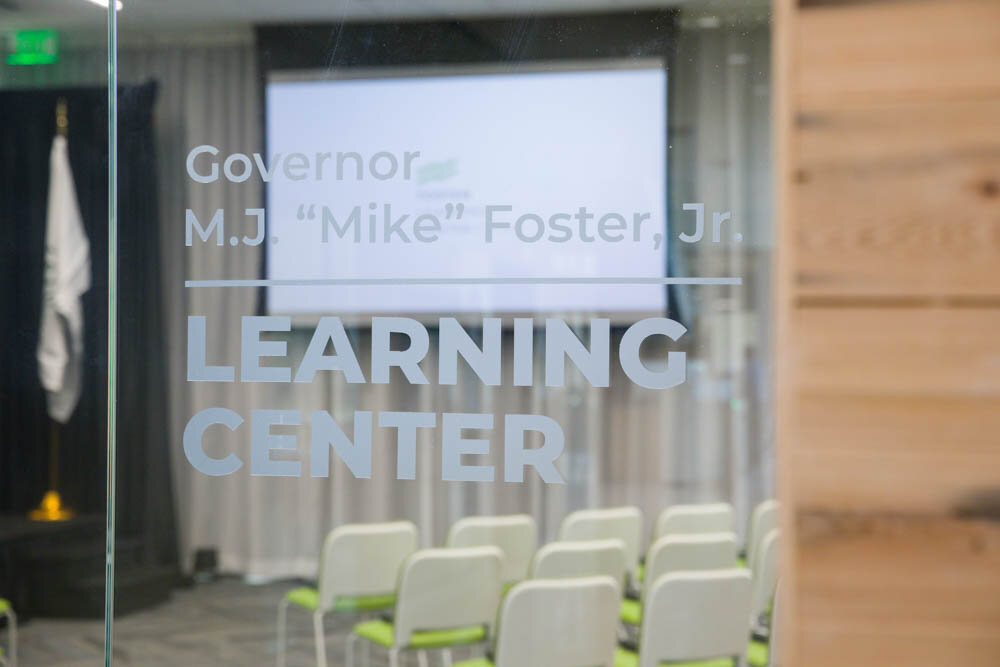 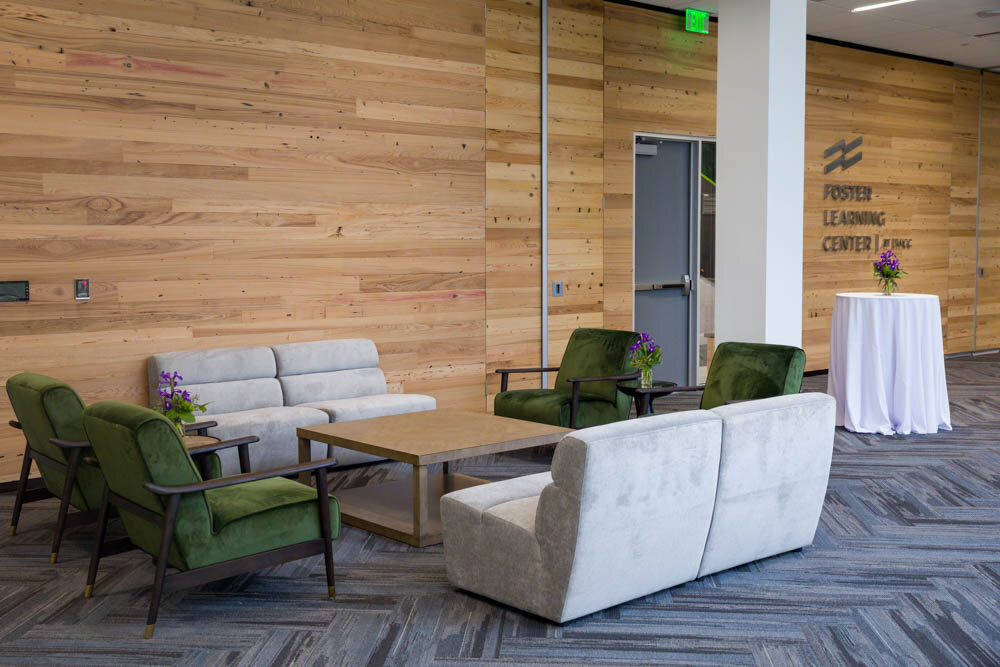 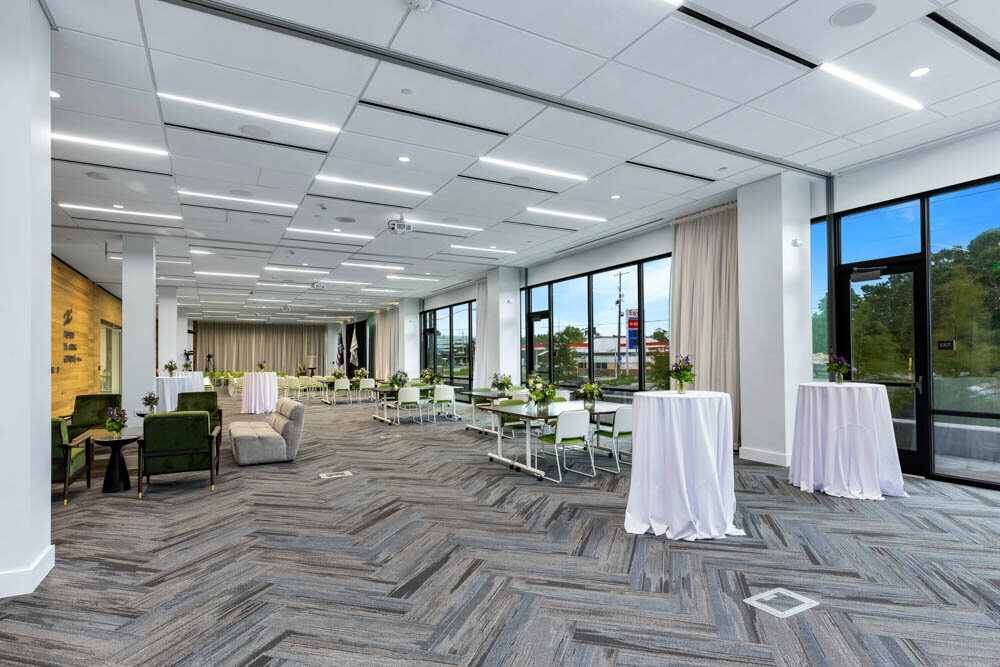 LWCC’s Safest 70 Awards celebrate policyholders who share our commitment to workplace safety. Our Safest 70 Stars go above and beyond in their safety efforts and lead the way in employee health and wellness.

Southside Machine Works believes in taking care of people, and they’ve used their long-standing relationship with LWCC to help them do just that.

Putting Motion Behind the Movement

The Louisiana Loyal Service Project engaged employees and enhanced our local community, providing traction for a better Baton Rouge through our partnership with Front Yard Bikes.